Has Great Britain been calling your name? Travel the cities and countryside of England and Scotland for this immersive journey through the UK. You’ll experience unique stops from London to Edinburgh - and everywhere in between! See an upclose view of the Beatles history in Liverpool, gaze in wonder at the mysterious Stonehenge, cruise Loch Ness Lake in the Scottish Highlands, enjoy a drink at the Glenfarclas Distillery, and so much more. 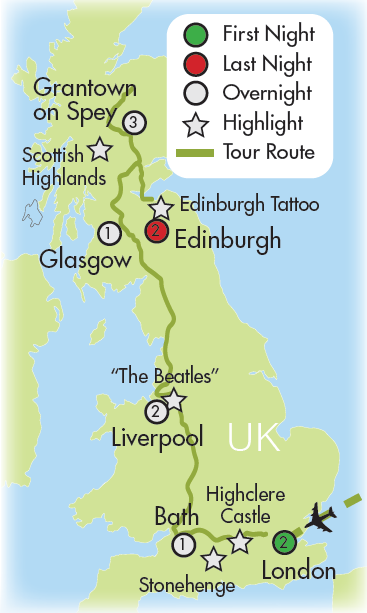 DAYS 1/2—WELCOME TO THE UK!
Start your morning in England with a guided panoramic tour of London. See Big Ben, Parliament, Buckingham Palace, the London Eye and more before checking into the Copthorne Tara Hotel, located just steps from Hyde Park and Kensington Gardens, for a two-night stay. D

DAY 3—WESTMINSTER ABBEY/TOWER OF LONDON
Visit Westminster Abbey, an integral part of London’s history for almost 1,000 years. It has been the site of every coronation since 1066, numerous royal weddings, and the funeral of Princess Diana. Enter the Tower of London to learn of its fascinating (and sometimes bloody) history and get an up-close view of the Crown Jewels. B, D

DAY 4—STONEHENGE/HIGHCLERE CASTLE
Mysterious and magical, Stonehenge is Europe’s most famous prehistoric monument built in stages from 3,000 BC. Enjoy a tour of Highclere Castle and Gardens, site of the PBS hit TV series and movie, Downton Abbey. The privately-owned castle is open for tours on a very limited schedule – and we get a look inside! Continue to the Georgian town of Bath for an overnight at the four-star Doubletree by Hilton. B, D

DAY 5—ROMAN BATHS/STRATFORD UPON AVON
Located on the site of ancient springs, extensive Roman Baths offer a glimpse into the ancient civilization’s impact on southern England. Explore Shakespeare’s hometown, Stratford-Upon-Avon, and see the house and impressive gardens where the famous bard was born and grew up. Check into the four-star Radisson Blu Liverpool for a two-night stay. B, D

DAY 6—THE BEATLES
An immersive journey at The Beatles Story Museum explains how four young lads from Liverpool were propelled to heights of fame and fortune from humble beginnings. Visit the Cavern Club, where they made their first appearance in February 1961, and played over 200 times since then. Later, we’ll board the Mersey Ferry for views of Liverpool’s UNESCO World Heritage riverfront. B, D

DAY 7—LAKE DISTRICT NATIONAL PARK
A scenic drive through England’s Lake District National Park features incredible views of Lake Windermere, made famous in the writings of Beatrix Potter. Cross into Scotland at Gretna Green, the first village in Scotland on the old coach route from London to Edinburgh. Overnight at the four-star Glasgow Argyle Hotel. B, D

DAY 8—LOCH NESS
Continue north to the Scottish Highlands where sharp eyes will come in handy on a cruise of Loch Ness, the inky home of the mythical Nessie. Enjoy a three-night stay in the Highlands at the Craiglynne Hotel, located just a short walk to the town center of Grantown-on-Spey. The hotel dates to Victorian times and is located just outside Cairngorms National Park. B, D

DAY 9—EILEAN DONAN CASTLE
Continue north to the Scottish Highlands where sharp eyes will come in handy on a cruise of Loch Ness, the inky home of the mythical Nessie. Enjoy a three-night stay in the Highlands at the Craiglynne Hotel, located just a short walk to the town center of Grantown-on-Spey. The hotel dates to Victorian times and is located just outside Cairngorms National Park. B, D

DAY 10—GLENFARCLAS DISTILLERY
Taste a bit of Scotland on a visit to the Glenfarclas Distillery, set high in the foothills of the Cairngorm Mountains. At Speyside Cooperage, watch skilled coopers and apprentices craft valuable oaken barrels used in the creation of uisge beatha, Scottish Gaelic for “water of life.” B, D

DAY 11—BLAIR CASTLE/GOLF MUSEUM/EDINBURGH MILITARY TATTOO
Explore Blair Castle, the traditional seat of the Dukes and Earls of Atholl and home of the only private army in Europe – the Atholl Highlanders. Tour the British Golf Museum before enjoying the highlight of this vacation - the Edinburgh Military Tattoo! Performed by British Armed Forces and international military bands, the Tattoo is televised in over 40 countries and watched by hundreds of millions! Spend two nights at the four-star Haymarket Hotel centrally located in Edinburgh. B, D

DAY 12—EDINBURGH CASTLE/WHISKY HERITAGE CENTER
Housing the Scottish Crown Jewels and the Stone of Destiny, Edinburgh Castle is one of the most imposing fortresses in the world. Explore the Royal Yacht Britannia, launched in 1953 and host to the Royal Family for 968 official voyages until its retirement in 1997. Later, Enjoy a tour (and taste!) of the Scotch Whisky Heritage Center. Cap off your Scottish experience with another night of entertainment at the Taste of Scotland Show at Prestonfield House. B, D

DAY 13—FLY HOME FROM EDINBURGH
After breakfast, travel to the airport for your flight home, carrying memories of this unique adventure. B